In honor of my first wedding anniversary, I’m doing a week-long look at marriage in the bible. Monday was marriage in the creation story, which first depicts something akin to marriage equality, before casting women below men after Eve’s sin. Tuesday was Levirate marriage, which describes a method by which widows can be married off to their spouse’s brother. Wednesday was polygamy, the one-sided practice of marriage plurality. These all dance around an uncomfortable truth: in many cases and in many ways, wives were property.

I should make clear of course that this doesn’t mean that the women in the Torah were subservient or weak, only that they were working in a system that was unkind to them. Read on!

Marriage and the Ten Commandments 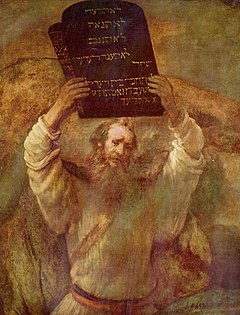 Perhaps the most succinct summary of a woman’s place in the Torah is in the Ten Commandments:

What can you compare a wife to? A house, a servant, an animal, or property. She’s mentioned second, so perhaps a house is even better than a wife. The implication is clear: women are property. It says so on the very stone tablets which so many people want to hang up in our courthouses.

In the Torah, we see this aspect reflected all of the key marriages. Sarah, for example, was clearly “bought” from Pharaoh from her supposed brother.

And it came to pass, that, when Abram was come into Egypt, the Egyptians beheld the woman that she was very fair. And the princes of Pharaoh saw her, and praised her to Pharaoh; and the woman was taken into Pharaoh’s house. And he dealt well with Abram for her sake; and he had sheep, and oxen, and he-asses, and menservants, and maid-servants, and she-asses, and camels.

Similar stories are repeated by Abimelech, both with an older Sarah as well as her daughter-in-law Rebecca. This pattern of buying a wife repeats in Isaac’s generation with Rebecca:

Behold, Rebekah is before thee, take her, and go, and let her be thy master’s son’s wife, as the LORD hath spoken.’ And it came to pass, that, when Abraham’s servant heard their words, he bowed himself down to the earth unto the LORD. And the servant brought forth jewels of silver, and jewels of gold, and raiment, and gave them to Rebekah; he gave also to her brother and to her mother precious things.

As more famously in the “purchase” of Rachel and Leah, and the deception of Jacob’s two marriages:

And Jacob loved Rachel; and he said: ‘I will serve thee seven years for Rachel thy younger daughter.’And Laban said: ‘It is better that I give her to thee, than that I should give her to another man; abide with me.’ And Jacob served seven years for Rachel; and they seemed unto him but a few days, for the love he had to her. And Jacob said unto Laban: ‘Give me my wife, for my days are fulfilled, that I may go in unto her.’ And Laban gathered together all the men of the place, and made a feast. And it came to pass in the evening, that he took Leah his daughter, and brought her to him; and he went in unto her. [ … ] And it came to pass in the morning that, behold, it was Leah; and he said to Laban: ‘What is this thou hast done unto me? did not I serve with thee for Rachel? wherefore then hast thou beguiled me?’ And Laban said: ‘It is not so done in our place, to give the younger before the first-born. Fulfill the week of this one, and we will give thee the other also for the service which thou shalt serve with me yet seven other years.’ And Jacob did so, and fulfilled her week; and he gave him Rachel his daughter to wife. […] And he went in also unto Rachel, and he loved Rachel more than Leah, and served with him yet seven other years.

Marrying for love? Certainly. But there is always a price to pay. I am fortunate that my wife’s father didn’t demand such wages…

The Price of Virginity 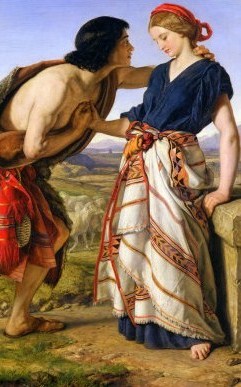 Because wives (and daughters) were practically property, they often had to be paid for. This was in the case of marriages-by-choice as above, but also under seedier circumstances. The law in the Torah specifically commands a bride price to be paid whenever a man sleeps with a woman that is not engaged to be married. While some might consider this just a spot of fun, looking at women-as-property, what the suitor has really done is lower the woman’s trade-in-value. The father must be compensated!

And if a man entice a virgin that is not betrothed, and lie with her, he shall surely pay a dowry for her to be his wife. If her father utterly refuse to give her unto him, he shall pay money according to the dowry of virgins. (Note the inverse use of the word “dowry”; it may be a translation error.)

The funny thing about this is that the man has to pay whether the father agrees to give away his daughter or not. But this rule is so important that it’s mentioned twice, though the second time has a more sinister spin:

If a man find a damsel that is a virgin, that is not betrothed, and lay hold on her, and lie with her, and they be found; then the man that lay with her shall give unto the damsel’s father fifty shekels of silver, and she shall be his wife, because he hath humbled her; he may not put her away all his days.

In Deuteronomy, the rule is tightened: now, it’s an un-divorcable marriage. But even worse is the expression “lay hold on her”. This is not a price for the woman’s virginity. This is a price for her rape.

Of course,  raping random women wasn’t the only awful way that a man could win a wife. He could also do it by going to war and killing a young girl’s entire family:

When thou goest forth to battle against thine enemies, and the LORD thy God delivereth them into thy hands, and thou carriest them away captive, and seest among the captives a woman of goodly form, and thou hast a desire unto her, and wouldest take her to thee to wife; then thou shalt bring her home to thy house; and she shall shave her head, and pare her nails; and she shall put the raiment of her captivity from off her, and shall remain in thy house, and bewail her father and her mother a full month; and after that thou mayest go in unto her, and be her husband, and she shall be thy wife. And it shall be, if thou have no delight in her, then thou shalt let her go whither she will; but thou shalt not sell her at all for money, thou shalt not deal with her as a slave, because thou hast humbled her.

If that doesn’t say “wives are property”, I really don’t know what does. It makes me so terribly sad to read this. I could go on and on about the rape rules in the Torah, but I’ve already strayed too far off topic. In the defense of the text, the midrash and later commentaries would dull down some of these rules quite a bit (for example, a woman can choose whether or not she wants to marry her rapist, but he still has to pay), but this is not the nice side of marriage in the bible.

Up next: Divorce and a wife’s legal rights. Still depressing, but at least we can look forward to my post on biblically mandated honeymoons. (There IS good stuff in there, too!)

One thought on “Marriage in the Bible – Part 4: Wives as Property”

Coat of Many Colors is what you get when you take a geek's-eye-view of the bible, the world's most popular book. Join me for biblical commentary, fun charts, and an occasional excessive dig into details as I explore the foundations of Judeo-Christian faith. You may also enjoy my general geekiness blog, Kniggit.net.